We fall in love, get engaged and get married.  When we have kids we start to genuinely reflect about our own heritage and value system.

Immigrants experience culture shock when value systems clash with those of others.

When our kids arrive we naturally remember our own childhoods.  We want our kids to enjoy their childhood and grow up to have a wonderful life.  As parents with  want to prepare them in the best possible way.   When kids go to  school they experience new attitudes by their teachers and especially by their peers.  Often, these attitudes might raise issues that we never really consciously contemplated.

To keep them our kids emotionally safe, we want the ability to communicate with them. We need to  allow them to ask questions, as they arise.  We do well to genuinely try to answer as many questions our children ask, as possible.  We want to admit that we may not have the answer ourselves. We also need to acknowledge that there are differences between the way we live at home and the way society shapes our attitudes and value systems.

Other parents may have raised their kids with entirely different value systems. They may think it is adorable when a child doesn’t worry about soiling their clothes, touching doorways with muddy or sticky hands,  rough-houses, or throws rocks.   “Kids will be kids.”  is often the prevailing attitude. In other cultures the prevailing attitude maybe:   “Kids are seen not heard.”   Straddling the differences is a challenge for all families who wish to raise kids who develop situational awareness.

I believe that being polite, considerate, and honest helps to foster self-respect.  These are traits that help us to get along with others and ourselves. Regardless of the setting, it fosters friendships and good will.  Most people greatly enjoy being treated in a considerate way;  being heard and listened to politely;  being able to rely that they are not lied to or deceived; that they are not being taken for granted.

Most people regardless of their background love being treated with respect.

Parents often struggle to find a healthy balance between the ways they wish to pass down to their children, and the need to allow kids to adapt to their surroundings.  Children need to get along with others, even with kids who encouraged to be tough and and mean.

Communicate with your child, and perhaps even listen in with the  Vigilint Family Assistance app.   By empowering the child to share with you in real-time, what they are dealing with, as it happens, helps parents to better guide them in  practical ways.

Your real-time advice helps your children feel safe and cared about.  At the very least kids will know, their parents care about them deeply.  This fosters self-esteem and helps children to develop a solution-oriented attitude and to seek advice when needed. They will not feel alone.  They feel supported by their families.

We are apparently living in a loneliness epidemic.  Over the past 80 years our culture has changed a lot and over the past 30 years industrialized nations  may have lost our cultural bearing.

I learn recently of a lady in Japan who died and only after her corps smelled terrible did the neighbors realize that she had passed.  In Japan they have a word for “dying alone,” they call it  Kodokushi.  Several hundred thousand people pass away, without a relative or friend who cares about them.  I thought it was terrible and I was shocked that a nation of over 100 Million people would not care for their families or neighbors.   Then I found out that over 45 Million people in quasi “First World Nations”  are lonely.  That doesn’t sound very  “first world.”  It is embarrassing and a sign we need to rethink our lives.

Recently I joined the marketing effort of Vigilint Biosensors, a company that has designed affordable smart watches that allow parents to check in on and communicate with their children and loved ones.  The Vigilint Family Assistant is an app that you can download that links to the kids or elderly parents Vigilint Smartwatches.  When I started reading up on the topic I couldn’t believe it.  OMG.  It is a world wide epidemic.  Apparently over 40% of people in the US report that they are feeling lonely.  And experts think that the actual number is higher.  How can that be?

Loneliness is deadly.  Literally.  First of all it doesn’t feel very nice.  Remember how you felt when your first girl friend or boy friend didn’t call you back for several hours, when you first started dating and you were not sure whether they really loved you yet?   That feeling.  It feels like that.  Most unhealthy.

Apparently it is genuinely unhealthy to feel lonely.  Vivek Murty, who served as the 19th Surgeon General in the US, shared that one of his more shocking experiences as SG was loneliness:  “I met middle and high school students in urban and rural areas who turned to violence, drugs, and gangs to ease the pain of their loneliness. I sat with mothers and fathers who had lost sons and daughters to drug overdoses and were struggling to cope alone because of the unfortunate stigma surrounding addiction.”  He went on to say: “During my years caring for patients, the most common pathology I saw was not heart disease or diabetes; it was loneliness. The elderly man who came to our hospital every few weeks seeking relief from chronic pain was also looking for human connection: He was lonely. The middle-aged woman battling advanced HIV who had no one to call to inform that she was sick: She was lonely too. I found that loneliness was often in the background of clinical illness, contributing to disease and making it harder for patients to cope and heal. ” (1)

Vigilint Biosensors has been created by a bunch of highly successful Silicon Valley Semiconductor engineers, who created microchips for mobile phones that measure vital signs. Is the person moving, is the person where they are supposed to be? It also allows you to talk to them through their affordable VB wrist watch. They will not lose their phone, since it is tied around their wrist.  Brilliant I say!

And apparently it not only reduces the stress of the parent, it also reduces the stress in the kids and the elderlies.  Social connections are so vital to our health. Apparently stress increases the cortisol level which is some kind of hormone in our bodies.  Loneliness increases the stress hormone called cortisol very much.  This causes inflammation which according to Time Magazine is responsible for stress-related difficulties including obesity, diabetes, metabolic disorders, heart diseases and other disorders. (2)

So this weekend, hug your mom, your grandmother, your dad and your kids, and make sure you check in with your neighbors.  Apparently for young and old  loneliness is an epidemic and nearly every second person feels lonely.  Smile, say hello and ask:  “How do you do.”  And mean it.  Increasing your social circle may be the best medicine against:  “Kodokushi.”   And I am sure you agree, none of us want to have that.

Instead talk with your family regularly.  Even if they are all grown, talk at least once a week, but more often if possible that is the only way you have enough time for a genuine relationship. Only regular contact let’s you know what is going on in their lives and for them to know what is going on in yours.  Bob Black once wrote a great tagline:  “Reach out and touch someone.”  If you can’t do it physically, do with via a text and even better a conversation.

There are plenty of people to call.  The New York times claimed that about one-third of Americans older than 65 now live alone, and half of those over 85 do.  Loneliness can be fixed.  We need to reintroduce the concept of TLC and talk to each other.   I love the quote that Vigilint Biosensors execs use:

Love that!  Happy trails and if you feel lonely reach out.  Call someone you haven’t talk with in a while. Remind them of the good times you had.  You will be surprised how happy it will make them to get your call after all these years.  Tell them you remember them and you feel good about your memories.  It works. 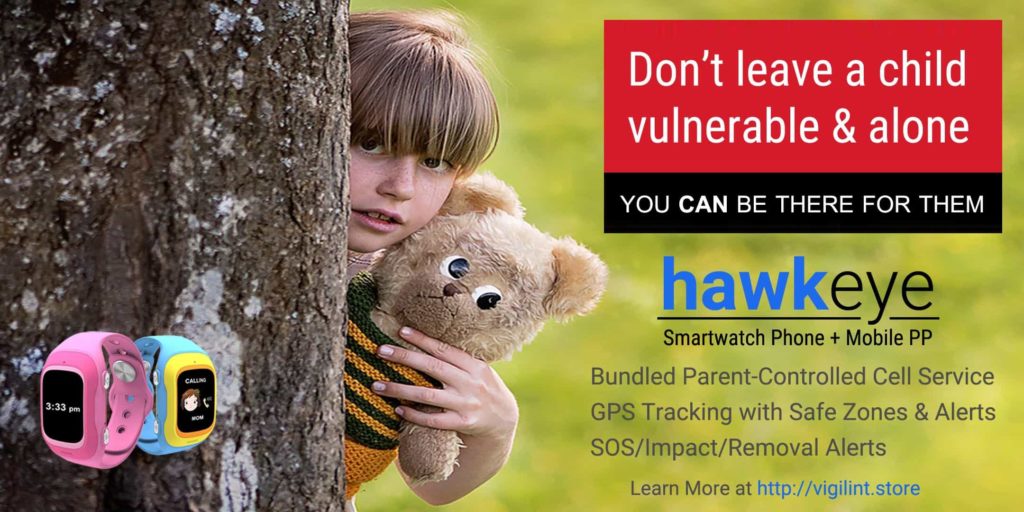 “Vigilint Family Assistant Services provide parents with life-altering insights collected from the kid’s smart watch that can inform parents of a child’s location and allows them to speak when needed,” said Kris Narayan, Chairman of Vigilint™ Biosensors. Mr. Narayan continued, “I am grateful Vigilint Biosensors can get our smart watches to the children, parents and schools that want the help kids with deal with stress and adversity to improve our children’s emotional resilience.”

Vigilint Biosensors Education Programs allow school districts to raise money while they provide kids smart watch phones and software to parents and their children which increase school safety. Modern tools like Vigilint Family Assistant help working parents stay in touch with their kids via calls, chat and the ability to guide the kids 24/7.  Kids have access to parents each time they need their parents’ input and feedback.  Hawkeye kid’s smart watches and the Vigilint Family Assistant app allow parents to create custom SafeZones™. School safety is increased when at the moment the child moves out of the SafeZone™, parents are alerted.

Knowing exactly where and how our children are is a major comfort for parents and kids.  Each kids smart watch holds up to 20 parent-selected numbers that children can call. Kids are able to speak to their siblings and close friends through a direct kid-to-kid “walkie-talkie” connection. The more parents and kids communicate the less stress they have due to wondering and worrying. Relaxed parents enjoy happier and more confident kids that have a better, healthier and smarter life thanks to increase emotional resilience as recent studies by the Harvard Child Development show. For more information regarding kids smart watches and child learning, please click here.

Tonja Jarrell, Principal of Paso Verde School, in California’s capital city: “Partnering with Vigilint Biosensors provides a valuable resource to our school community. We work with families and the community to offer solutions that increase school safety, allows our staff and scholars to focus on teaching and make our students feel safe enough to learn thereby increasing their outcomes.”

Th improved communications via kids smart watches help teachers deal with children’s and faculties’ anxieties about the fears regarding school safety related to the recent increase of shootings at schools:  “My experiences in the educational community, have shown that these tragedies affect all of us, not just the families involved,” said Nancy Phelps, President Coyote Creek Learning Fund. “Vigilint Biosensors software and smartwatches help protect our kids while providing parents peace of mind.”