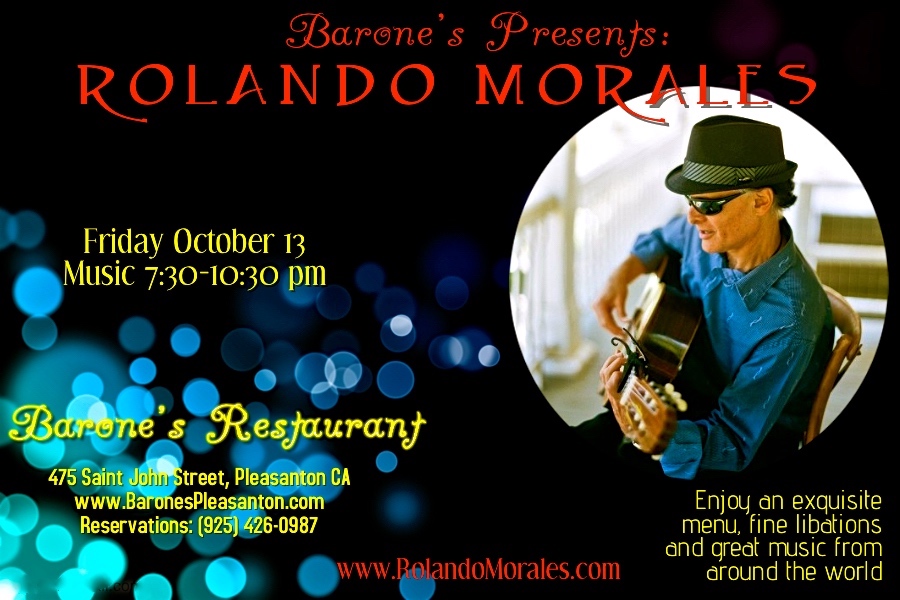 Is everyone gagging on the thick, toxic fumes?  Feeling a little sick?  And the fires are bad, too, huh?

It’s been hard keeping up with the the daily barrage of events.  The floods, the hurricanes, the earthquakes, the saber rattling, more sexual oppression, insults launched from the White House and Congress…  And now the fires in our back yard.  Everyone’s on overload.

My private gigs have slowed down a bit which affords a moment to breathe, even if it was smoky this morning…

If you need an escape from the madness this weekend, join me at Barone’s Restaurant in Pleasanton this Friday Oct 13 and leave your superstitions at the door.  We don’t have time for that nonsense.  DO bring your appetite, as the menu here is amazing.  And I’ll be there in the intimate bar on solo guitar and voice.  Details below.

Then on Saturday night October 14, I’ll host the long-awaited return of my dear, talented friend Janice Maxie-Reid to The Vine at Bridges in Danville.  She is the superb keyboardist-vocalist with the 4-octave range who has performed with none other than Stevie Wonder.  We always light it up when we play here together.  The last time was about 3 or 4 months ago, so don’t miss it!  Details below. 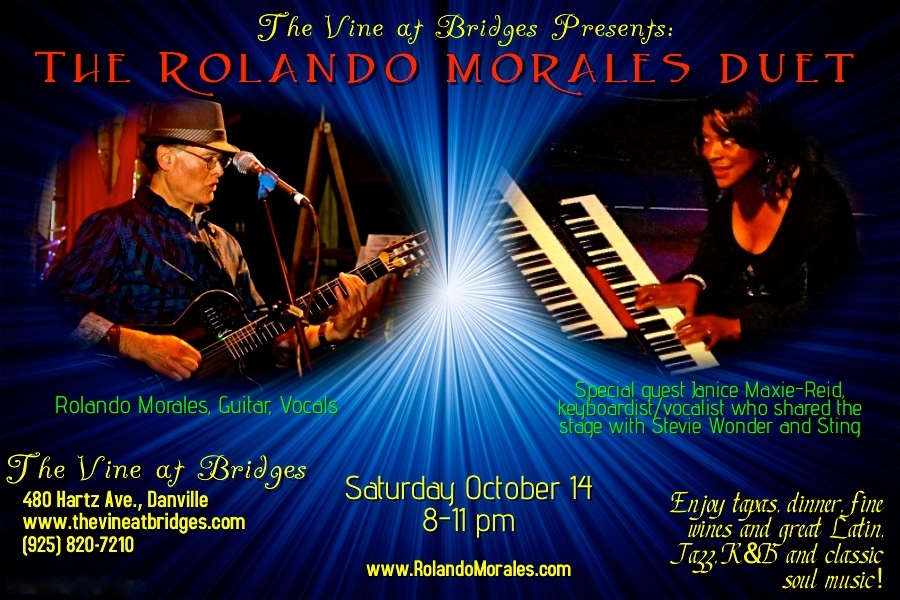 And remember that next week Saturday October 21st, my band returns to The Sausalito Seahorse.  Not only will we have a stellar band including the great Carlos Reyes on violin and Paraguayan harp, Danilo Paíz on percussion and vocals, Dave Flores on drums, and Yours Truly on guitar and guitar synth and vocals; We’ll also feature a very, very special surprise guest on bass.  We can’t really advertise him due to contractual restrictions.  Let’s just say we’re all so excited to be able to play with him again and look forward to seeing him on stage again with Tower of Power.  So his picture in the poster is a big Question Marc.  I wonder if he’s arriving in a VW?  Make your reservations at the Seahorse at (415) 331-2899.

Check out below what’s also happening with my return to Havana in Walnut Creek, Maria, Maria in Danville, and Alameda’s own C’era Una Volta.  Details and dates are below.

Come out and say hi and let me know you’re okay.

Saturday Oct 14, Vine at Bridges, 480 Hartz Avenue, Danville, approx 8-11pm. The Rolando Morales Duet returns to this cool winery and nightspot.  Enjoy a wonderful selection of wines, superb dinners and tapas while grooving to this powerful duet.  Tonight Rolando welcomes the enchanting keyboardist-vocalist Janice Maxie-Reid.  She has shared the stage with Stevie Wonder and Sting, so you know she’s doing something right!  And on guitar, voice and his pedal board of magic, the passionate Rolando Morales.  There’ll be lots of soul and classic R&B mixed into this Latin caldo, so don’t miss it!  www.thevineatbridges.com, (925) 820-7210. 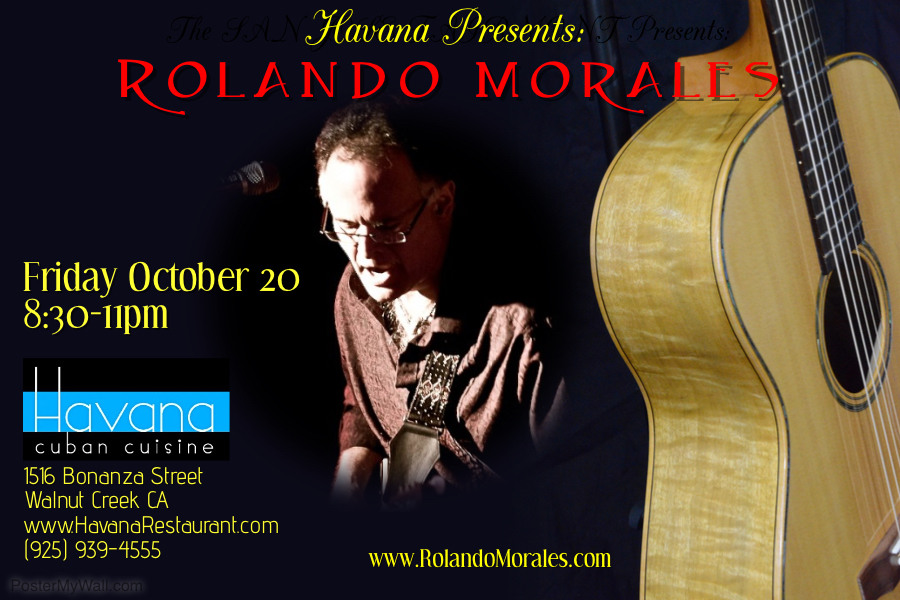 Saturday Oct 21, “An Evening with Rolando Morales and Carlos Reyes,” Sausalito Seahorse, 305 Harbor Drive, Sausalito, approx 8:30-11:30pm.  After two months away, these two passionate musicians finally return to The Seahorse to put on their unique show at this fun waterfront restaurant and club.  The great Paraguayanviolinist/harpist Carlos Reyes and passionate guitarist / vocalist Rolando Morales will play a short set in duet to close out the dinner hour, followed by a concert and dancing to the World Class Rolando Morales Group featuring a very special surprise guest bassist from Tower of Power to be announced at the show;  from Lauryn Hill, the exciting drummer Dave Flores; from Dizzy Gillespie and Ruben Blades, the powerful Nicaraguan Latin percussionist/vocalist Danilo Paíz; from Paraguay, the thrilling violinist and harpist from Arturo Sandoval and Steve Miller, Carlos Reyes; and the powerful Rolando Morales leading the journey on guitar, guitar synthesizer and vocals.   Don’t miss it!   $15.  Make your  reservations at (415) 331-2899, www.sausalitoseahorse.com. 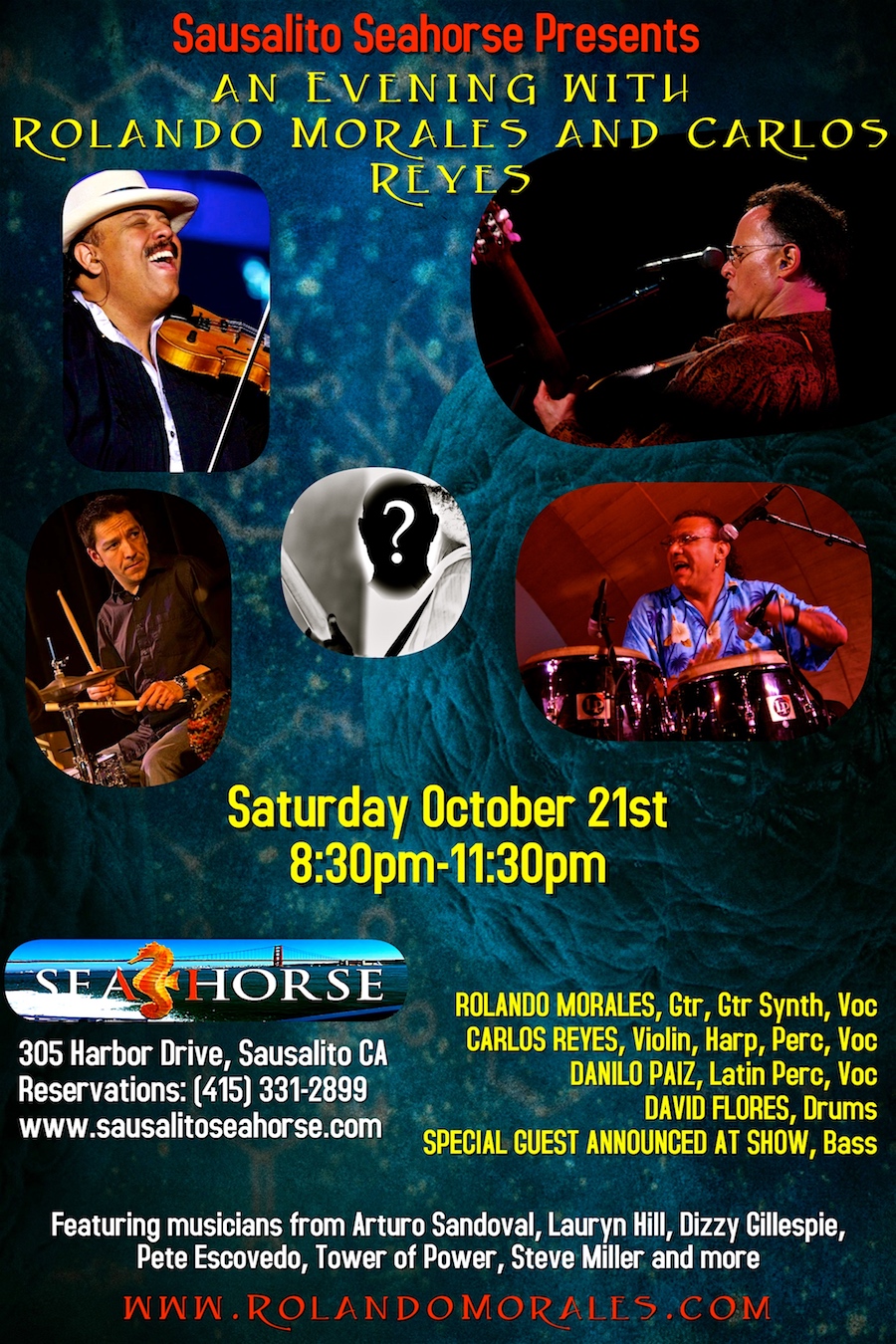 Friday Oct 27, Maria, Maria Cantina, 710 Camino Ramon Road, Danville CA, approx 6-9pm.  After a month away, Rolando returns for a Friday night show at Carlos Santana’s Danville restaurant.  Enjoy Rolando on solo guitar and voice with his diverse repertoire performing out on the patio by the fire pits.  See if he has any special guests sitting in…  (925) 820-2366,  www.mariamariarestaurants.com.

Saturday Oct 28, C’era Una Volta, 1332 Park Street, Alameda, CA 94501, 7-9:30 pm.  After a month away, Rolando returns to this fine Tuscan-style restaurant that welcomes you like family to embrace the spirit of Italy.  Rolando will take you on a musical tour of the Americas and beyond on solo guitar and voice in this intimate room. This is a great match and a rare opportunity to catch Rolando in Alameda!  www.ceraunavolta.us/ (510) 769-4828.

Saturday July 29, C’era Una Volta, 1332 Park Street, Alameda, CA 94501, 7-9:30 pm.  After more than 3 months away, Rolando finally returns to this fine Tuscan-style restaurant that welcomes you like family to embrace the spirit of Italy.  Rolando will take you on a musical tour of the Americas and beyond on solo guitar and voice. This is a great match and a rare opportunity to catch Rolando in Alameda! www.ceraunavolta.us/, (510) 769-4828.

Before the show enjoy shopping at the lovely stores on Park Avenue and enjoy an afternoon in the balmy weather of Alameda with stroll on the beach:

Why don’t you create one of the most romantic follow ups for your successful Valentine’s effort and bring your loved one to one of the most romantic settings in the Bay Area.  The quaint family atmosphere with amazing art by a word famous artist, whose paintings hang in the San Francisco Opera as well as all over Europe, is complimented by fantastic food, impeccable services which allows you to make your sweet heart feel like a princess or queen, or prince or king as the case maybe.   Being served by people who take pride in giving you a genuine old-world pleasure will create long term happy memories for you both. And if you have been married for along time, you may want to bring your grand children and introduce them to opera in a way that will open up their hearts to the finer things in life.

In 2014 Open Tables voted C’era Una Volta the Best Bay Area Italian restaurant.  It is located on 1332 Park Street, in Alameda and offers parking in the rear of the building.

This weekend there is a fundraiser that provides world class opera singers performances, a four course meal, and the first glass of wine for the small price of  a $95 per person of which $45 will given to the James Toland Vocal Arts programs.  The program cultivates and supports talents who aspire a professional career as vocal performers.

She will make her Metropolitan Opera debut as Karolka in Janá?ek’s Jen?fa in October of 2016 and will sing Countess Ceprano in Verdi’s Rigoletto in January and April 2017.

Ms. Lyons was vocal fellow at the Tanglewood Music Center in both 2011 and 2012.  Highlights from those residencies include performances Ravel’s Trois Poemes de Stephane Mallarmé, Prokofiev’s Ugly Duckling, Chausson’s Chanson Perpetuelle, Monteverdi’s Lamento d’Arianna, and excerpts of Gluck’s Iphigénie en Tauride with Susan Graham and the Boston Symphony Orchestra. She and pianist Bretton Brown have appeared in recital at Opera America’s National Opera Center, the WMP Concert Hall in New York City, and the Sunset Center in Carmel, California in the Winner’s Recital for the Carmel Music Society. Ms. Lyons has appeared as a soloist with the UC Berkeley University Chorus, with the Vermont Philharmonic, and San Francisco Choral Society at Davies Symphony Hall in their performance of Mendelssohn’s  Elijah featuring Rod Gilfry.  More

Arnold Livingston Geis, tenor, is a Los Angeles based musician and performer originally from Washington State. Geis began his career in Southern California as a church soloist. In 2013 marked Geis’ first season as a chorister in Los Angeles Opera’s performances of Wagner’s The Flying Dutchman. He has since performed on the Dorothy Chandler stage in favorites such as Carmen, La Traviata, and Billy Budd.

Geis  sings with the Los Angeles Master Chorale, an opportunity that has lead him to appear at the Walt Disney Concert Hall as a soloist in Handel’s Messiah, Bach’s St. Matthew Passion, and Beethoven’s Missa Solemnis. Geis’ most recent stage credits include Cavaliere Belfiore in Il viaggio a Reims, Chevalier in Poulenc’s Dialogues of the Carmelites, Laurie Lawrence in Little Women, and Ferrando in Mozart’s Cosi fan tutte.

He is honored to have worked under the esteemed conductors Gustavo Dudamel, Michael Tilson Thomas, James Conlon, and Grant Gershon. An active session singer, Geis’ voice can be heard in recent blockbusters such as After Earth, Maze Runner, Godzilla, The Rise of the Planet of the Apes, 50 Shades of Grey, and Teenage Mutant Ninja Turtles. He holds a BM in vocal performance from Biola University and graduated with his MM in vocal arts from The University of Southern California.

Clara Osowski’s recently completed the Vancouver International Song Institute, the International Workshop on the songs of Edvard Grieg in Bergen, Norway, and traveled to Tours, France to attend the Académie Francis Poulenc. She was also featured in the 2014 Baldwin-Wallace Art Song Festival, in Berea, Ohio and competed in the 2014 International Vocal Competition in s’Hertogenbosch, Netherlands. In 2015, she was the only American to reach the finals of the Das Lied competition under the direction of Thomas Quasthoff in Berlin, Germany. This past October Clara was a finalist in the Liederkranz Foundation in New York City. Numerous festivals have introduced Clara to a number of international artists and art-song masters, including Graham Johnson, Felicity Lott, Francois Le Roux, Julius Drake, Irwin Gage, and Richard Stokes.

James Kallembach’s Songs on Letters of John and Abigail Adams with the Lydian Quartet on the occasion of the Adams’ 250th wedding anniversary at their historic home in Quincy, Massachusetts, and Bach’s St. Matthew Passion with the Bel Canto Chorus of Milwaukee. In addition to her solo work, she participates in a number of ensembles, including Consortium Carissimi, Lumina Women’s Ensemble, the Rose Ensemble and Seraphic Fire.  More

Baritone-Austin Siebert just completed the Merola Opera Program and performed the roles of Mr. Gobineau in Menotti’s The Medium and Marco in Puccini’s Gianni Schicchi. Siebert also covered Dr. Malatesta in Donizetti’s Don Pasquale. Additional recent engagements include outreach with the Dallas Opera as Belcore in Donizetti’s L’elisir d’amore, Mustafá in Rossini’s L’italiana in Algeri with Seagle Music Colony, and the German General in Kevin Puts’ Silent Night with Fort Worth Opera Festival. Austin recently earned a Master of Music Degree in Vocal Performance at the University of North Texas, where he was seen as Dappertutto/Coppélius in Offenbach’s Les contes d’Hoffmann, Pritschitsch in Lehár’s Die lustige Witwe, and the title role in Sondheim’s Sweeney Todd. Mr. Siebert received his bachelors from Northwestern University and is a native of Shelbyville, IN.